I’ve been unable to think properly for the last week and a half since coming back from St. Pats. Because of this, I’ve sorta slacked off on posting pictures and such. Also, I didn’t take my camera to St. Pats (because I’m an idiot), so I’m just really waiting for everybody else to send me their pictures and thus I can create a compilation.

Still, I have some newer pictures, so I may as well post those instead.

Last week, Mike and Paola had a beer tasting party. It was a hell of a good time, and I’d like to thank them for having it. I look forward to brewing a bunch of new beers up for the next one. They posted some pictures, which I shamelessly stole and stuck into my own web album because this lets me keep things in one place.

On Sunday, we were having brunch at the Majestic, when Mikey gets a call, walks outside, and comes back with a plastic light-up Spuds MacKensie. Naturally, we had to take him on a tour of the town before returning him to his rightful owners. Mikey has more pictures than I do, these were taken using my cell phone, which I’m getting better at using nowadays.

So that was last weekend. I missed Trivia night at the Saucer last night, because a) I was really tired, but mainly because b) I was actually unconscious on the couch at the time. I’ll be there next week though.

On the plus side, I received my cell phone gear from Cingular, including a data cable (pictured to the right), which I used to modify my phone. See, the LG CU500 I have now is a 3G phone, and thus capable of good data reception. Google Maps Mobile is extremely cool, for example. 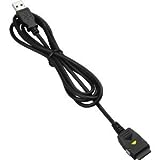 However, Cingular annoyingly broke this functionality when they released the phone. After installing any “unapproved” Java application onto the thing, it asks for approval every single time it connects to the damn network, while you’re using that application. With Google Maps, this makes it damn near unusable.

But those clever people over at howardforums.com figured out a way to bypass this. So with the cable and a piece of software called BitPim, I was able to modify the phone to stop asking me those stupid questions. Suddenly Google Maps Mobile and GMail Mobile are the greatest things ever.