Hearthstone is a game I like to play when I get a few minutes here or there. Fun to play, the matches are relatively short, new cards appearing every so often keeps it interesting. If you have not played it, but want a fun and free game, give it a try. Works pretty good on phones, great on tablets and PCs.

Anyway, here’s my thoughts on the recently announced nerfs which will be accompanying the new expansion next week. If you’re not into Hearthstone or gaming, you might just skip this post.

END_OF_DOCUMENT_TOKEN_TO_BE_REPLACED 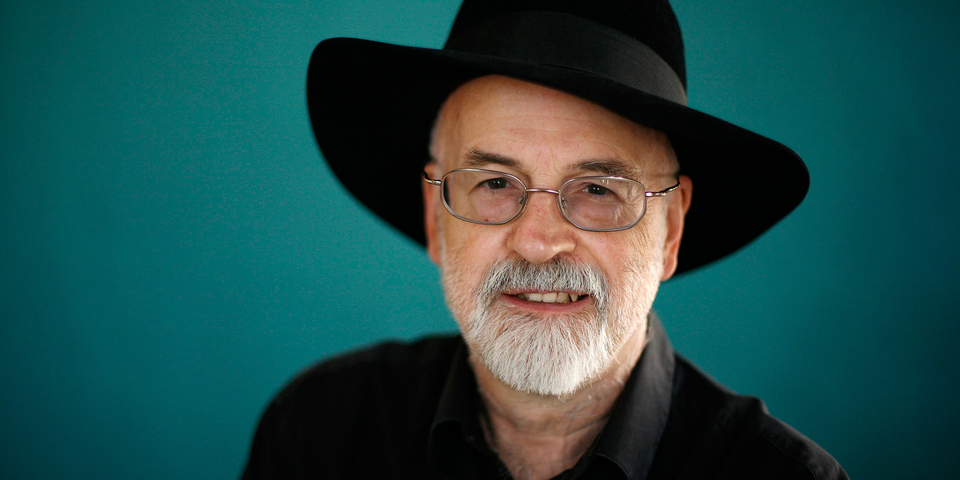 When I was a kid, I found about Sci-Fi and Fantasy novels from my dad very early on. He had quite a large collection, including an original paperback of Dune (in sadly terrible condition), lots of the ERB Princess of Mars collection (NSF kids, BTW), and all sorts of assorted good collections from the 60s and 70s. Heinlein, Asimov, Clarke, just everything. About 200 to 300 novels.

At one point he was going to toss them. I stole the whole lot instead and took it to college with me. Now they sit in my bookshelf, because *hell no* you’re not tossing those!

In something like 8th grade, I discovered Douglas Adams in my school library. Sometime shortly after that, I discovered the Discworld of Terry Pratchett. Instant addiction.

When I was in college, one summer, I was staying at home. I was probably around 19 or 20, and working for the summer, as a computer salesman (yes, seriously). My dad had a predilection for late-night reading back then. Lot to do during the day, people bugging him all the time, best to do his reading alone, when he could smoke, at some time after 10 pm. Simple. He used to borrow from my collection (his, which again, I totally stole and told him I was doing so), but which also had many of my own added in.

One night that summer, he chose to read “Moving Pictures”.

I woke up to my dad *screaming* in laughter. He came into my room, at about 2 am, turned on the light, and in between fits of giggling, read this back to me:

‘What’s it called?’ he said cautiously.

‘We call it Evil-Minded Son of a Bitch,’ said the newly-appointed Vice-President in Charge of Camels.

‘ ‘S a good name for this camel,’ said the handler fervently.

I laughed along with him, and proceeded to inform him that a) yes, I had read the book like a dozen times, and b) it was 2 in the god damn morning, let me sleep you son of a bitch, I need to be at work at 7 am, jackass.

Here’s the thing. Thinking back on that, that particular quote isn’t actually funny without the backstory and setup. It’s a straight-man joke. It’s the kind of joke you need setup for in TV shows. That’s how good Terry Pratchett was. You had this entire mental image of the surroundings, the people, the background, the backstory, everything necessary to make that joke *friggin’ hilarious*, without ever seeing anything but black text on a white background. Terry was simply that good of a storyteller.

Tonight, I received in the mail “The Shepherd’s Crown” from my Amazon pre-order. I have not opened it yet. I actually teared up when I looked at the package, because Terry died back in March, and I have not fully dealt with that fact yet. I have read and reread everything Terry Pratchett ever wrote, oh, hundreds of times. I have memories of me and my dad laughing over his prose. I know excessive amounts of details about the Discworld and can quote ridiculously long passages from the novels for no reason whatsoever.

Laughing along with Terry at his insanely funny parody of the crazy world around us helped me through sometimes, especially when I needed to laugh rather than weep at the silliness surrounding us all.

I’m not sure I can open that package from Amazon. I’m sure I will, eventually.

But, you know what? I miss you, Terry. Thanks for all the laughs, especially when I needed them the most.

Again, you should read this webcomic.

TPB says that they want to have their servers flying over international waters.

While I’m sure that this is pretty unrealistic, though certainly do-able, if they actually get it to work then there’s only one real response I can make:

On another note though, I don’t see how this solves their basic problem. They still have to have that radio link on some shore somewhere. In a sense, this is no different than if they put the things on a boat and ran a bunch of cables to land. Ignoring potential attacks on the boat, those cables have to touch ground somewhere, and that’s the point of attack. Unless you have lots of them and have them possibly mobile, which is at least more feasible with radio than with undersea cables.

I suspect that the idea is more of a political talking point. They do seem to love coming up with those.

I would never recommend NetSol for any sort of service of any kind, but damn if they can’t make a funny parody.

Google has a pretty neat interactive Doodle for Thanksgiving…

There’s more, but I haven’t found them all yet. To find them, just get the right combination of shoes, hat, and feathers and poof, it transforms.

This tweet got me to thinking about the myriad uses of technology used for rather simple things.

For example, the weather. The National Weather Service has set up climate observation stations throughout the US, at places like airports, on top of tall buildings, alongside freeways, random places in the countryside, even on ships and buoys in the ocean. These monitor the temperature, humidity, and a bunch of other things of that nature. Sometimes they’re integrated into the overall system, like at an airport tower, sometimes they’re just self contained boxes mounted somewhere with power, like on a freeway sign or beside the road. Anyway, these boxes record this information and generally use radio transmitters to send updates back to some centralized location in each region. Usually a local university, TV station, NWS local offices, etc.

This information is then sent on to the next stop via various methods. As the technology evolved, old methods like phone lines got replaced with the internet, or on other more secure lines. They call this overall system The Gateway, and it has its own special protocols and methodologies along with it as well. Anyway, the data is sent back to the NWS’s central server center somewhere. Probably in DC, although they likely have multiple redundancy in various other locations. This information is naturally combined with all the other information from all over the world, so that a complete up-to-date system of meteorlogical data of the entire world can be maintained.

Thousands of other organizations read from this data via various protocols of their own. For example, The Weather Channel gets a lot of their information from this large, distributed, database via some kind of real time feed. They even re-serve the data themselves using various formats, such as the XOAP system.

That XOAP system is interesting because it’s a pretty good feed of weather related data for various regions. I use it myself, indirectly. On my iPhone, for example, I have the Typophone Weather application, which uses the 3G network (which is itself a highly connected system of radio towers using multi-spectrum packet switching technologies), to connect to the internet (this big system of pipes which is in reality not all that well put together but nevertheless works because of incredible fault tolerance in its various protocols), in order to query that XOAP system (which uses XML and SOAP standards for its interface).

All this happens in order to display the current temperature on my iPhone’s lock screen, while I sit here on a couch, not four feet from a friggin’ window.

The future is awesome.

A while back, the personal genetic testing company 23andme offered a special sale. They discounted their normal price from $500 to $99 for one day only. Naturally, I jumped on it.

Just got my results back. Nothing particularly surprising here, but it is neat.

There’s a ton more information (apparently I’d respond really well to Interferon Beta Therapy, whatever the hell that is), and I haven’t gone through it all yet.

One thing I did note is that they do allow you to download the raw data, which is pretty cool. However when I looked at it, I noticed that it’s not a complete record of your DNA, just a sampling. Basically it’s like 500,000 markers of it instead of the full 3 billion or whatever. Clearly you don’t need the complete sequence to draw useful information out of it.

Still, kinda neat that this is within the reach of the average person.

Since people have been emailing me and asking for it…

It’s similar in concept to the Simple Facebook Connect plugin. In fact, it rips off quite a lot of the same code. But instead of Facebook, this integrates your WordPress site better with Twitter.

Now, there’s a lot of Twitter plugins out there already. And this plugin by no means competes with them (yet). This plugin can’t, for example, send a post to Twitter (yet). Nor can it pull posts from Twitter to display on your own site (yet).

What it does is to provide the framework for a more complete Twitter integration. Right now it can do:

Not much, really. But it has the backend code necessary to make it easier to connect your site to a Twitter Application, and to make plugins surrounding it that won’t interfere with each other. That’s the same basic reason for the Simple Facebook Connect plugin.

So yes, eventually this plugin will send and receive stuff from Twitter. But for now, it lets you allow users to Login and/or to have users Comment using their Twitter credentials.

Edit: This post has moved to here: http://ottopress.com/2010/dont-include-wp-load-please/. Take your comments there.

Here’s a practice I see in plugins far too often:

The reason for this sort of thing is that there’s some option or code or something that the javascript needs from the database or from WordPress or whatever. This PHP file is, basically, generating the javascript on the fly.

Usually, the case for this turns out to be something minor. The code needs the value from an option, or some flag to turn it on or off. Or whatever.

Problem is that finding wp-load.php can be a bit of a chore. I’ve seen extreme efforts to find and load that file in plugins before, including searching for it, examining the directory structure to make decent guesses, etc. This sort of thing has existed even before wp-load.php came around, with people trying to load wp-config.php themselves and such.

But the real problem is simpler: This is always the wrong way to do it.
END_OF_DOCUMENT_TOKEN_TO_BE_REPLACED